Unite Students, the UK’s largest provider of student accommodation, today announces its new property in Bristol will be named after Princess Campbell, one of the city’s first Black ward sisters who helped lead the city’s fight against racial discrimination.

Drone footage also released today shows the current progress of building work on the site in the heart of Bristol city centre, which is within walking distance of the University of Bristol campus and close to the city’s main hospital, bus station, and central shopping area.

Campbell House, which will have 431 beds when complete, is due to open in summer 2022, ahead of the start of 2022/23 academic year. In total, Unite Students – which is headquartered in Bristol – is investing £45million in the development. Campbell House will be Unite’s 15th property in the city.

This update on progress comes after work on site was paused during the early months of the Covid-19 pandemic, after planning permission was granted in February 2020. Work restarted on site in November 2020.

The former Bristol Royal Infirmary building, which fronts onto Marlborough Street, and listed chapel building at the rear are both being retained and sensitively restored for residential and community use.

Princess Campbell (1939-2015), who the building will be named after, was a pioneer who challenged prejudice in nursing and housing in the city after she arrived from Jamaica in 1962. She trained as a nurse and became the city’s first black ward sister, working at Glenside Hospital in Fishponds, Bristol. She received an MBE for services to the community in 2011 having campaigned tirelessly for Black people and disadvantaged communities. Princess was a founder member of the Bristol Black Archives Partnership.

“Once complete, Campbell House will be the jewel in the crown of our properties in Bristol. The mixed-use development will create unique space, sensitively combining new with old, in a prime city centre location.

“We hope it will become a real asset for both the city of Bristol more widely, and for the local community.” 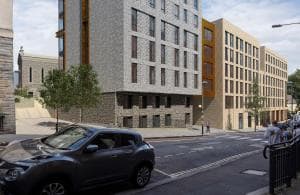