2020 is a year most us will not forget in a hurry. Covid-19 has impacted us all in one way or another.

But for one 17-year-old teenager, who we’re not naming to protect his identity, the pandemic has seen him kicked out of his family home.

His mum, who has underlying health issues, told him to leave their home because she felt he was a risk to her health. She feared he was failing to adhere to rules when he met up with friends outside their home.

The fallout led him to move out. He initially stayed with a school friend and then another member of his extended family. But he later turned up at Bristol City Council’s Temple Street offices and declared himself homeless.

It was there that he was put in touch with Bristol charity 16-25 Independent People, the lead agency of Bristol Youth MAPS (Mediation, Assessment, Prevention, Support), which is commissioned by Bristol City Council.

Despite being contacted twice, his mum refused to allow her son to move back into the family home.

And were it not for the support he received and the referral to a social worker, there’s a chance this teenager may have been left with few options and, over time, may have found himself sleeping rough on the city’s streets.

Unite Students, the UK’s leading owner, manager and developer of student accommodation, has supported the Bristol Youth MAPS project for the last three years. Bristol is Unite Students’ home city, where its head office is located.

In the last three years, MAPS has received 1,982 referrals; supported 300 young people into accommodation and helped 250 to remain, or return to, living at home.

In 2017, the ground floor of Unite Student’s Nelson House in Rupert Street, was renovated by Unite Students and leased to the Bristol Youth MAPS Project team at a significantly reduced market rate.

This enabled MAPS to focus its resources on preventing homelessness. Over the years, families have been offered support to try to resolve their issues or differences.

In many cases, that has led to reconciliation. Where this is not the safe option, or possible, MAPS works with other agencies to find alternative accommodation options for young people.

This is exactly what happened in the case of the 17-year-old teenager forced to leave home during the Covid-19 pandemic. Although Covid-19 was the catalyst in this case, there had been family tensions and a breakdown in communication over a longer period of time.

“Unite Students has been instrumental in making this service a success, with their help we have subsidised office space in the city centre which is an ideal location for young people to attend and to get the support that they need’.

Councillor Helen Godwin, Bristol City Council’s cabinet member for women, children and homes, welcomed the support from Unite Students. She said: “Tackling youth homelessness is a key priority for us. Young people in Bristol today face multiple forms of disadvantage, such as a higher risk of poverty, discrimination in the housing and job markets and a reduction in welfare benefit entitlements. These factors combined put young people at particular risk of insecure housing and homelessness.

“We recognise that there is a severe shortage of affordable housing in Bristol and it is incredibly difficult for young people to find suitable accommodation in the city at a price they can afford. Bristol Youth MAPS provides a safe, well located environment, where a multi-agency team are able to offer help and assistance to vulnerable young people at risk of homelessness.

“Where possible, we want to find solutions that allow young people to stay living at home with their families – as long as it is safe to do so.”

Unite Students named 16-25 Independent People as its charity of the year in 2017 and has continued to work alongside it since then.

“As a responsible business, our priority is to do the right thing for our students and staff as well as the people who live in our communities.

“All young people deserve a fair chance to succeed and the Bristol Youth MAPS project has made a real difference to young peoples’ lives who need support the most. Its mission reflects our core values and we are proud to be able to support this vital work in the Bristol community.” 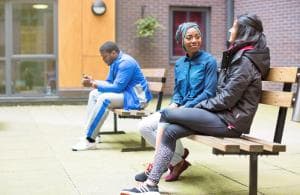