Archaeologists from MOLA have discovered large blocks of Reigate stone during their excavations at our property development site at Middlesex Street, in London, ahead of the building’s construction. The rare stone is to be donated to The Tower of London for essential repair works.

Large blocks of Reigate stone – a green-tinged sandstone which was once mined from the North Downs in Surrey – have been uncovered by MOLA archaeologists during excavations in Whitechapel. These have also revealed some fascinating finds, including the remains of the Boar’s Head Playhouse, a Shakespearean-era performance venue, and a near-complete 18th century clay pipe kiln.

Reigate stone was once a popular building material during the medieval period, however is no longer mined, and very difficult to source, as the mines have been closed since the 1960s and will never re-open. Today, as part of an agreement set up by Historic England, salvaged Reigate Stone found on archaeological sites is logged and collected before being reused to make repairs to historic buildings. Its location of reuse is also recorded. The precious supply of building material from the Boar’s Head site will therefore be donated to the Tower of London to help with the conservation of the buildings which incorporate Reigate stone.

Reigate stone was previously favoured as it was one of the few building stones found close to London, therefore it was relatively easy to transport. It was also considered to be suitable for carving. However, as a type of sandstone, it was soft and porous, making it extremely prone to weathering. Today, there are almost no examples of Reigate stone left on the outside of surviving historic buildings. More hard-wearing stone, like Bath stone, was typically favoured in buildings in the 19th century.

The stone uncovered on the Boar’s Head site was found in the construction of 17th century buildings, where it had likely been reused from older medieval buildings in the area, torn down when Henry VIII ordered the dissolution of the monasteries from 1536. This find shows evidence of having been recycled and repurposed after its original use, and we’re excited to be able to assist in continuing to reuse it in efforts to protect and conserve historic buildings. 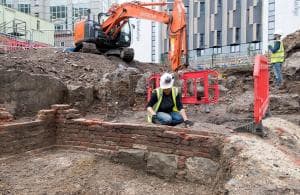 10,000 BLACK INTERNS: Providing opportunities for all

In June, we welcomed nine interns to Unite Students as part of our partnership with 10,000 Black Interns.
Read more