Heather Knight is leading a team of archaeologists from MOLA excavating the site of the Boar’s Head Playhouse in Whitechapel, London, in advance of construction of new student housing by Unite Students. We’re delighted to be opening the site to the public, who are invited to join pre-bookable tours on Saturday the 5 October 2019. For more information about the events and how to book visit: www.mola.org.uk/tours-boars-head-playhouse-archaeological-excavation.

The Boar’s Head Playhouse is an often-overlooked Shakespearean-era site, with a long and significant theatrical history. It is only in the 16th century that the theatrical tradition, that London is famous for today, emerges and booms.

The Boar’s Head site is referenced in one of the earliest accounts of theatre in London, as a space used for open-air performances of plays. One such account describes an incident on the 5 September 1557, where the Lord Mayor is ordered to send his officers to forestall a scheduled performance at the site of a ‘lewd’ play entitled ‘A Sack Full of News’. This incident is 10 years before the Red Lion Playhouse, 20 years before The Curtain and The Theatre and 30 years before The Rose were established.

In 1598, the owner of the Boar’s Head, Oliver Woodcliffe, converts the existing inn into a playhouse, adding a series of tiered galleries, a stage and a central yard around it. A year later he upgrades it again, with extra galleries and a roof over the stage.

The square playhouse, with galleries on all sides looking down onto the stage, allowed audiences to view performances from different angles. Amongst the plays performed were raucous comedies including, No-body and Some-body, with the character No-body ‘attyred in a pair of breeches which were made to come up to his neck, with his armes out of his pockets’. Many of Thomas Heywood’s plays were performed including a chronicle of the life and reign of Elizabeth I If You Know Not Me, You Know No Bodie.

A number of popular acting troupes were hosted at the Boar’s Head, including the Lord Derby’s Men and the Lord Worcester’s Men, later the Queen’s Men, led by the famous actor and playwright Thomas Greene.

As we excavate the archaeological remains on site, we hope to discover artefacts that relate to the playhouse, the performers and theatregoers that frequented the site, and to study areas of the playhouse’s structure, including the galleries on the eastern side of the stage.

Once we have exposed and studied the remains they will be preserved in-situ within the footprint of the new Unite Students development.

And do keep an eye out for updates on the site here at www.unitegroup.com/blogs, and www.mola.org.uk/blog, or follow progress on both Unite’s and MOLA’s Twitter feeds. 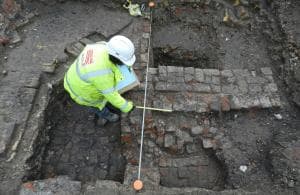